The Gillroyd Parade are Dead

Rob writes with the skinny:

"I'm not sure what we've been waiting for but it's fair to say we've waited long enough before announcing the demise of the Parade that will be forever Gillroyd. Thanks for all you support, encouragement, turning up to gigs and comment, positive and constructive. Kev's still laying down the music with The High Hollers,... John's busy running the Internet, I'm playing Scrabble mostly."

As a fare-thee-well here's a sneak preview of our unlikely-to-see-the-light-of-day EP: Kazoo Man 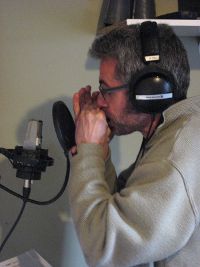 The Gillroyd Parade spent yesterday recording in a studio for the first time which was interesting, frustrating, challenging, rewarding, fun, educational, monotonous and productive. There are some pictures here and probably more to follow.

We got four songs down and the rough mixes were sounding rather nice. We should hopefully have them ready on CD for sale for our gig at The Chemic on the 20th, but if not soon after.

Big thanks to Pat for the use of his time, equipment and patience.

Good news. We have just confirmed we’ll be playing on Sunday 18th April downstairs at Verve (Merrion Street, Leeds) which is a smashing little venue. Come on down for a springtime ’Parade fix. Facebook event page.

UPDATE: Rather lovely evening. See the gig page for setlist.

Something in the Loft 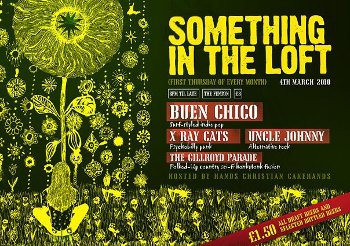 More short notice giggery. We're back at The Fenton this coming Thursday (4th March 2010) at Something in the Loft with Uncle Johnny, X-Ray Cats and Buen Chico. Should be a hoot. This time we'll be playing at the more civilised time of 8ish.

Here's a larger version of the poster and the Something in the Loft Facebook group.

Hot off the presses. Brand new The Gillroyd Parade stickers and badges*. Get yours at Friday’s gig or just, y’know, ask us.

(*Not suitable for young children due to small, sharp parts and distressing imagery.) 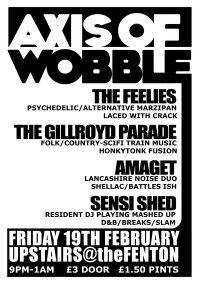 Poster for 19th of February Axis of Wobble at which we'll be playing. Also a facebook event page on which you can invite yourself and register your excitement.

Looks like we're sandwhiched between The Feelies and Amaget so it's great varied line up and all for a paltry three hundred pence cover charge. Bonza!

UPDATE: Smashing evening, thanks very much if you made it down at short notice. More info.

Ta very much to all who came to The Packhorse this last Tuesday, and especially to John and Chris for playing with us and upping the sex appeal.

In other news just broken we’ll be playing at the Axis of Wobble night at The Fenton next February 19th. More details on that as they emerge.

When I Lay My Burden Down music vidya

Try this. Bound for Glory rehearsal recording from 28th October 2009.

Pleased to announce we've booked out The Packhorse again for a mid-december hoe-down. 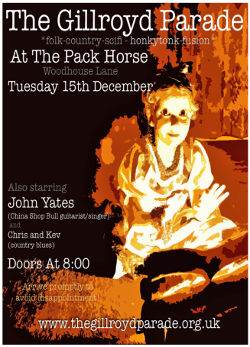 Come all ye faithful, faithless and faith-inbetweeners to a night of Gillroyd Parade hosted music. Starring The Gillroyd Parade (natch) and also featuring the irrepressible and irresistible John Yates plus other guests to be announced later. I may even dig out that Guthrie song about children being crushed under a christmas tree (nah, not really).

I’ve done gone and shifted all the old website content over to this swanky new system. Seems to be okay. Might be a few broken links or whatnot for a while till I fix em but the old site is still there. Stay tuned for edifying ’parade related info and updates!

Hello. Here again in case you missed ‘em when we wallpapered them all over facebook are the two music videos made for us without us even asking. They are set to some rehersal recordings we made in August at Rob’s place.

Becoming Mark Kermode (A Love Song by The Gillroyd Parade)

And also for good, or not so good, measure a mobile phone recording of F’Oldin Money from our soggy Unity Day set.

Please enjoy, but if you don’t please don’t tell anybody.